The ChoirGirlz Journey – Start to Finish

Back in 2001 when Dorothy McDonall, Mary Ellen Moore and I were singing soprano with the famed Toronto Mendelssohn Choir, we became friends, and ultimately decided to get together to learn some songs we bonded with from the “O Brother Where Art Thou” sound track – a movie we loved, and which gave us inspiration. We began rehearsing on Monday evenings in the summer – the night usually reserved for the choir during the year – just so we could continue our friendship, and explore uncharted musical territory!

We were all learning something new – I was learning to play guitar; Mary Ellen and Dorothy were learning to sing challenging harmonies, and we embarked on a journey together, that at first had modest and realistic goals which we set for ourselves. Our first “gig” was a house concert at my place, where we performed 12 songs we slaved over during 8 rehearsals, for our good friends from the Mendelssohn Choir. We felt, after that trial by fire (It was indeed a HOT summer night), that we should try and secure some gigs at retirement homes every few months.

Enter Peter Occhipinti – a guitarist from the famed jazz family in Toronto, I hired to paint my house. Peter heard ChoirGirlz rehearsing one night, while he was painting my powder room, and invited us to perform at a community event he co-ordinated in Scarborough. We jumped at the chance, and prepared even more new material, and seemed to go over well with the audience. Around the same time, 9/11/01 occurred, and I began writing songs for the ChoirGirlz to sing, inspired by the impact of these events.

Our Friday night rehearsals became etched in our calendars, and something we really looked forward to at the end of a busy week. We always began by sharing stories of our week – our frustrations, our joys – and our friendship grew deep as we each learned a lot from each other on how to deal with STUFF. After “Thai-ing One On” with delivered dinner, we’d work on new songs and familiar ones – and as we got better as musicians, I was inspired to write a lot of songs for us to learn. As my guitar playing got better – I opened myself up to learning more complicated chords that included more jazzy colours, and the vocal harmonies followed suit!

Our first recording of mostly original songs, was done in my little studio – vocals done in my living room, and mixing and mastering done out in Mississauga with dear friend, the late David Norris-Elye, who helped to put a bit of a professional “ping” to our sound. Our CD release that year was at Hugh’s Room, and we had a lot of good support from friends and family that night. We also met Greg King – http://www.gregking.ca – photographer extraordinaire – who took us under his wing, and came to nearly every show we performed from then on, and took fantastic pix of our journey. If you go to his website – you’ll find a page under my name – Debbie Fleming – and there are pages of Choirgirlz concerts to view.

We’d try and put on some sort of “show” every 2 months or so – to keep our material fresh, and find incentive to do new material. We became members of the OCFF, and attended the OCFF conferences in Ottawa every year – doing “Girlzilla Showcases” of our own – setting ourselves up in the halls of the hotel, and serenading people with our songs as they walked by, or joined in. We had many laughs, and met many fantastic people in the folk community through those conferences. The Good Lovelies, who are now Juno and Folk awards winners – found ChoirGirlz to be one of their inspirations as they were starting out – and we had planned to put a show together called “Songs of Bitches”, but life got in the way, and the show never happened. At one of those conferences, however, we met and jammed with John Jackson and Steve-Paul Simms, and had such a ball together – we ended up doing a show together at Gate 403.

From our yearly gigs at Free Times Cafe, Plein Air Salon (where we will do our final show July 7, 2010); to the ultimate peaks of our professional association -performing at Summerfolk and Winterfolk – we have had an incredibly rich journey in our 9 years together. We have released three recordings of our songs – each of us has contributed to the writing of our material. We’ve learned to be not only singers, but entertainers – and people who come to see our shows always end up leaving with a smile on their face, and a lighter step.

But as with everything – Change Gonna Come – and in order to stay viable and alive in this sometimes cruel music business – Change GOTTA Come – or you lose your audience. People who come out to live shows understandably want to hear new material, and have a new experience whenever they go and hear groups like ChoirGirlz. Yes, we have our original songs that we’ve recorded, that we feel we must perform at every concert we do. Some songs are a must – like audience favourites Angel Wings (written by Mary Ellen) and Vacuum Cleaner Tango (by moi) – but the demand for new material has become a demand that we can no longer easily accommodate.

Learning a new song involves a lot of practise and homework – learning vocal parts, getting guitar chords smoothly under the fingers, and more recently – -bringing in the new instrumental sounds of ukuleles as an extra colouring for my guitar accompaniment. I must confess, adding ukuleles to our sound was my idea of bringing our sound up a notch, and both Dorothy and Mary Ellen found a new love in being able to make their own accompaniment with these sweet little instruments. That being said – in order to impliment the new sound – there would have to be more effort put into practising, so we could keep our beautiful vocal harmonies, WHILE AT THE SAME TIME, playing uke. Not as easy as it looks. Unfortunately, Mary Ellen is performing the work of two people at her very demanding day job as a church accountant, and understandably, when evening comes, she has time only to eat and sleep. Dorothy is very busy with her writing, with her horse, her volunteerism, her involvement in her Chadora Club – not to mention the increasingly difficult journey from Aurora to Toronto in order to rehearse weekly – no time to practise.

We mutually decided that we’ve far surpassed where we originally intended to travel on this journey together. We’ve had some fantastic times together, laughter, tears, great songs, fabulous harmonies – and each of us has learned a whole lot. We decided we’ve “Gone about as far as we can go” in the present circumstances. We realize that it’s far too difficult an effort to continue to expand, grow, promote, publicize and face the frustration of dwindling audiences, with our schedules as busy as they are.

We look forward to singing some of our favourite songs for you at our Plein Air Salon concert – and hope the weather will be good for this lovely outdoor rain-or-shine concert. If it rains – well – I guess the universe will be crying just a small tear for the end of the ChoirGirlz most AMAZING journey. Hope to see you there. Check out http://www.choirgirlz.com for details. 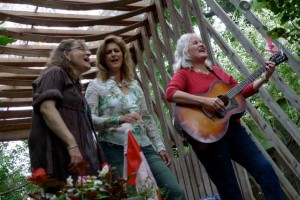