Debbie (nee Duncan) Fleming was born in Ottawa, Canada – her father, William Duncan, a military man as well as a government employee, and her mom, Annabel a homemaker.

The family, including Debbie’s younger sister Donna, moved to the newly developing Toronto suburb of Etobicoke, which, at the time was still rife with farms and market gardens. Attending Sunnylea, and Parklawn elementary schools, Debbie later attended what was then named Royal York Collegiate, and is now known as The Etobicoke School For the Performing Arts. It was at Royal York that Debbie discovered her voice, and rock and roll music, wrote her first songs and sang with her first band The Starfires.

She attended McMaster University, and earned her Honours degree in Psychology. She was hired by the London Psychiatric Hospital after graduation, where she worked as a Psychometrist, administering psychological tests to patients. It was in London she met B3 organ genius Gord Fleming, who became her husband, and soon Debbie traded her psychological pursuits for a life in music. 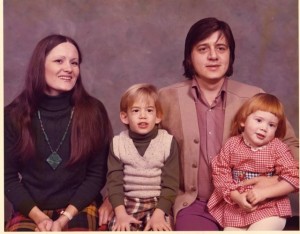 Debbie, Gordie, Gord and Becky – the family before the divorce.

She began writing songs again, and began her career as a studio and television singer, while her husband Gordon played keyboards with Ian Tyson, and attended University of Toronto to upgrade his education.
When her ten year marriage to Gordon came to an end, her career in the studios took off – she was now a single parent, and the sole support of her children. She saw Gordon Jr. and Rebecca through university, and both are now grown and have successful careers, not connected with the music business.

Meanwhile, Debbie continues to live in her mid-Toronto home, and is as busy as she ever was – writing, rehearsing, arranging, recording, singing, gardening, practising guitar and ukulele and enjoying her friends and family.