ROCK AND ROLL AND RONNIE HAWKINS

Rock and Roll had just taken the world by storm when Debbie discovered her singing voice. She began singing with a small combo, The Starfires, while still in high school, which played the current hits for sock hops and church dances. She experienced an epiphany when she discovered the infectious grooves and funk of Ronnie Hawkins and The Hawks (including Levon Helm and Robbie Robertson, who later became The Band). Debbie began to be a featured guest singer with that band during matinees at Toronto’s Concord Tavern(now Long and McQuade).  At that time, Ronnie Hawkins, recognizing her talent, asked her to go on the road with him and the band as a backup singer. Debbie chose to go to McMaster University instead, and during her time in Hamilton began exploring choral singing with the McMaster choir, as well as fronting a dance band on weekends. It was at McMaster when she was introduced to the wonders of Jazz – Ella, Charlie Parker, Horace Silver, et al. 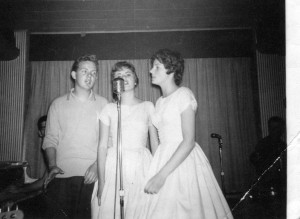 Bill Cudmore, Debbie and Pat McDonald sing with The Hawks at the Concord Tavern 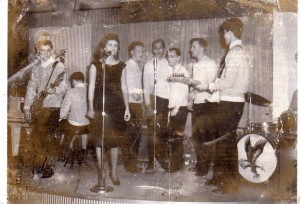 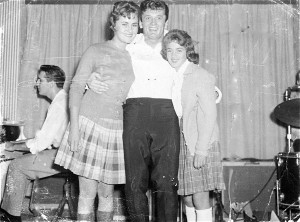 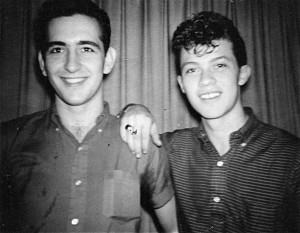 Upon graduating from Mac with an Honours Psychology degree, Debbie got a job in London Ontario where she reunited with old friend Ronnie Hawkins, who introduced her to Gordon Fleming, his keyboard and B3 organ player. She resumed her career as a singer after marrying Gordon, and fronted a band, which included her husband, Fred Keeler and John Wetherall from David Clayton Thomas’ Shays, performing in the southern Ontario circuit. Below are the two promo pieces they used to advertise the band in the clubs.  They were known as Debbie D and the Gord Fleming Trio.  The poster with the trio depicted, was conveniently folded over to eliminate the photo ofDavid Clayton Thomas, the original leader and singer for the Shays. The trio were living hand to mouth, and couldn’t afford a professional poster.   By this time, DCT was now enjoying fame and fortune  with Blood Sweat and Tears. 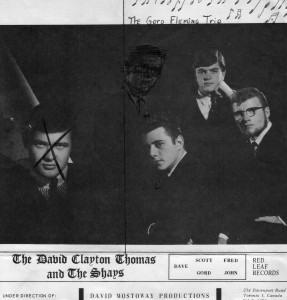 Poster for the Gord Fleming Trio – DCT was folded over, and Gord Fleming, Fred Keeler and John Wetherall were depicted with very professional calligraphy.

THE BEGINNING OF STUDIO WORK 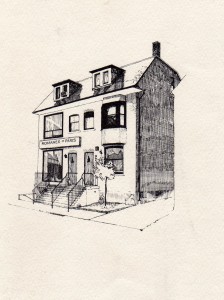 Captain Audio 4 track studio on Hazelton Avenue where it all began for me.

After the birth of her two children, Debbie began songwriting in earnest, and recorded a demo tape of her creations with Gord’s band, and  fledgeling recording engineer, Jim Morgan at Captain Audio Studio in Toronto. Studio owner, Ben McPeek, heard Debbie’s tapes, and immediately launched Debbie into the world of jingle singing. Intending to become a singer who would be a producer’s dream, Debbie took music courses in harmony and arranging, so she could learn the best way to communicate with musicians in their own language.  Nepotism started it – but she really took hold in the studio scene on  recommendations from other singers who enjoyed working with her.

She also joined the Toronto Mendelssohn Choir in 1973 under the baton of Dr. Elmer Iseler, and quickly learned to be a crack sight-reader, with a vocal range spanning 3.5 octaves. 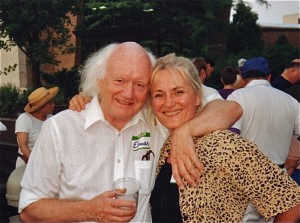 Her vocal versatility, excellent ear, pitch and sight reading abilities led her to become one of Toronto’s top session singers for many years. She has recorded hundreds of jingles, her operatic New Diet Pepsi commercial winning a Clio Award in the late ‘80s. She has added backup vocals to hundreds of albums recorded by artists such as Anne Murray, David Clayton Thomas, Rob McConnell, Oscar Peterson, Shirley Eikhard,  Hagood Hardy, Rita MacNeil, Susan Aglukark, Rik Emmett and country superstarAlan Jackson to name only a few.  She continues to do backup sessions and arranging for Borealis Records. 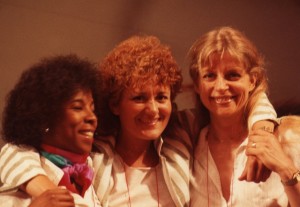 Colina Phillips, Me and Stephanie Taylor, 2 of my favourite singers to work with! 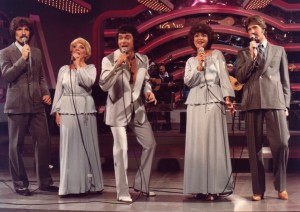 In the 70’s and 80’s, when television production in Canada was at it’s peak – Debbie was a regular singer on The Tommy Hunter Show, The Ronnie Prophet Show (where she led the vocal backup quartetFree Spirit), Stars on Ice, Downright Disco, Patsy Gallant, Bobby Vinton, and many more specials and productions.. On these shows, she sang everything from pop and country to R& B and funk. During the tapings of Stars on Ice, she had to emulate the sounds of the pop singers of the day, from Diana Ross to Jennifer Warnes on songs used as background for the skating stars. The CRTC in Canada at that time outlawed the televised broadcast of any music that was not recorded by Canadian artists, and thus all background music for the show had to be re-recorded. This was a great thing for Canadian talent in general, and even better for Debbie, who analysed and duplicated with a fine-toothed comb, the styles and nuances of all the great singers of the time.  Here’s one of Debbie’s proudest moments on the Ronnie Prophet show – singing backups for the great George Jones in He Stopped Lovin’ Her Today

In 1980, Debbie released her first solo album for Canadian Talent Library, entitled “Let Me In”.  It was arranged and co-produced by Tom Szczesniak and Doug Riley, and consisted of mostly original songs by Debbie, and some penned by Lynne Deragon. 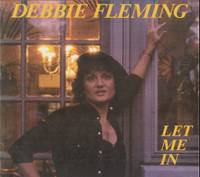 Let Me In on The Canadian Talent Library label was Debbie’s first solo recording. 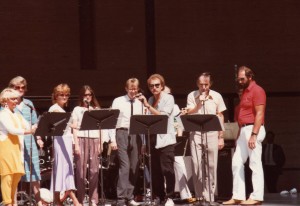 It was also during the 80’s, Debbie assembled her own jazz vocal octet, known as Sing-Co-op-8. This group was largely a sight-reading rehearsal group, but they recorded for CBC, and performed a few concerts before they disbanded. All the singers in the group were busy session singers and musicians, and scheduling was difficult. 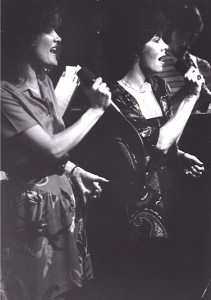 Debbie and Lynne Deragon sing their songs at PWDs on Yorkville, in 1981.

Early in the 1980’s Debbie teamed up with Lynne Deragon, an actress, songwriter, singer 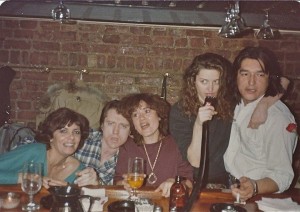 and good friend, to form a fabulous band featuring many of their original songs. When they played at PWD’s in Yorkville, their sound man was none other than Graham Greene, Canadian actor who starred in Dances With Wolves!  This was Debbie’s first step out of the studios and into live performing.

Because of her reputation as an excellent reader and singer, she was hired to sing backup vocals with Petula Clark, legendary British Singer known for her hits “Downtown” and “Don’t Sleep in the Subway“.  For 6 weeks, Petula headlined at the Royal Alexandra Theatre in Toronto with “The London Palladium Show” backed by Debbie and Jamie Ray.  After that show ended, Jamie and Debbie were invited to travel to the U.S. with Petula as she appeared at Caesar’s Palace in Las Vegas, and Atlantic City. In Vegas, Petula was the opening act for George Burns, and, on another occasion, David Copperfield.    Debbie and Jamie were also involved in a northern U.S. tour with Petula, and enjoyed every minute of singing with Petula and her world class musicians. 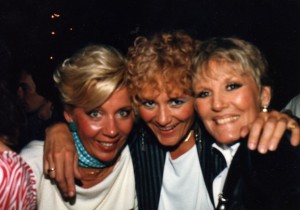 Jamie Ray and Debbie pose with Petula Clark during one of their tours in the 80’s. 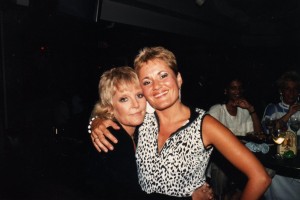 Petula gives a hug to Debbie

Also in the early ’80’s, Debbie also began working with society dance bands for corporate and private engagements, and with these bands she sang everything from jazz standards, to the songs that were currently popular. She could switch from Cyndi Lauper to Tina Turner on a dime, and she became one of the most sought-after vocalists in this circuit for 15 years. 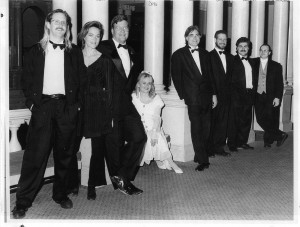 This photo shows the importance of a chick singer (NOT!)

Debbie was also part of a large group of singers produced by Keith Whiting at CBC, called The Gospel Project. In this 20 voice group Debbie sang with Jackie Richardson, Betty Richardson, Jeff Jones, B.J. Reed, Colina Phillips, Sharon Lee Williams, John Rutledge, David Blamires and many others. Debbie wrote original songs for the group which were performed on CBC.  Here is a song I wrote, sung by the Gospel Project with solos by Jackie and Betty Richardson  He’s Gonna Be There.

After being knocked for a loop by Take 6 in the early 90s, Debbie assembled another group of singers to satisfy her need to re-explore crunchy jazz harmonies, and to rehearse and sing vocal charts that she began to arrange and lift. The group – all crack sightreaders — became Hampton Avenue and under Debbie’s leadership, recorded 3 CD’s and won the Jazz Report Vocal Group of the Year in 1999. Although the larger version of Hampton Avenue has now disassembled, Debbie sings and arranges for The Hampton Avenue-4, who still perform.  The 4 have appeared at the 120 Diner, The Jazz Bistro, the Beaches Jazz Festival, and private functions. 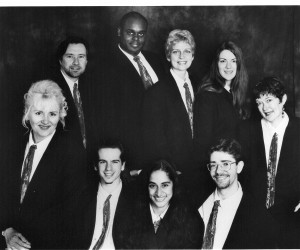 BACK TO COUNTRY AND MORE RECORDING

Her love of Country music led to a self-produced solo recording in 1994, consisting of all her own songs, and entitled Nothin’ in the World (That This Old Girl Can’t Do). 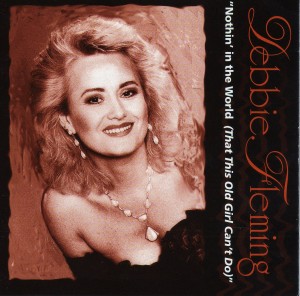 Debbie’s country CD was getting airplay, and she became known as a “Country singer”.   Debbie was also writing R&B and pop songs, and recording and releasing these songs to radio.  In order not to confuse the radio people who had her pegged “country”, she released her R&B songs under a different name  – “A.C.Kurrett” (if you say it a few times quickly, you’ll understand the humour behind it).  These songs were well received in Canada – especially in Quebec. You can hear three of the singles released by A.C. – Baby Let’s Slow Down,  Just a Memory and I Can’t Believe It – on my Reverb Nation page. 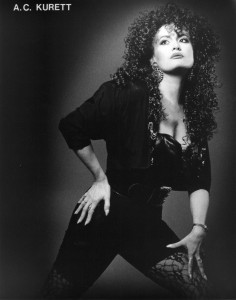 Debbie poses as A.C.Kurrett – her R&B personna of the 90’s

After the release of the film O Brother Where Art Thou, Debbie teamed up with two of her Toronto Mendelssohn Choir associates to form ChoirGirlz – who performed and recorded together over a period of 9 years.  Debbie was the guitarist, producer, arranger and songwriter for this group. 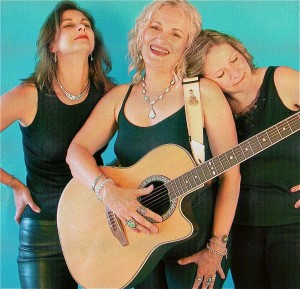 40 YEARS IN THE MENDELSSOHN CHOIR ENDED IN 2015

Debbie tendered her resignation from the choir in 2015, after lending her voice to it for 40 years.  As a result of her association with the choir, and the skills she learned – vocal control, excellent pitch, good sight reading  – she was first-call in the studio scene when operatic or classical voices were required. 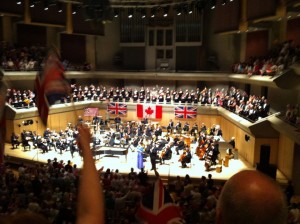 Debbie’s love for Jazz, and standards, led her to reconnect with her cohorts she had met the McMaster Jazz Club – Bruce Harvey and Jack McFadden – and as a trio they appeared at the Downtown Jazz Festival together.  In July 2004, Debbie added drums and sax to her trio, and as The Debbie Fleming Quintet, debuted at the prestigious Montreal Bistro in Toronto.  During this time, she recorded her first solo jazz album, featuring all of her original songs.  The album – Steppin’ Out – garnered healthy air play  and reviews.

Here is where I met 2 key members of my jazz trio – Bruce Harvey (topmost) and Jack McFadden far right.

In 2016, Debbie has just released a new jazz/R&B CD consisting of songs by Burt Bacharach and Hal David, one of the 20th century’s most prolific songwriting teams.  The CD is entitled “Full Circle – Back to Bacharach” and contains much-loved tunes such as Anyone Who Had a Heart, Walk On By, A House Is Not a Home and many more.  Full circle refers to the fact that Debbie was singing these same songs in the 60s, when they first came out, and this CD has brought her back to her formative roots.  The CD can be purchased by going to the Shopping Cart of this website.  For more info about this CD, please go to News and Views, and Deb’s Blog.

Debbie continues to guest with jazz and  R&B bands such as the Niagara Rhythm Section; The Virgil Scott band;  The Robbie Rox Band; The Betty Richardson Band, John Finley, and Cathy Young.  She is a regular singer in the One Stop Jazz Safaris helmed by Jazz.fm’s Jaymz Bee.

She often leads a band at the 120 Diner in Toronto – Toronto’s hottest new live music club, and has appeared at the beautiful Jazz Bistro as well.

To hear some of her recent songs and videos, please go to Debbie Fleming Music, or Debbie’s Youtube Page.

Check out the Events Page for upcoming concerts in which Debbie is involved.