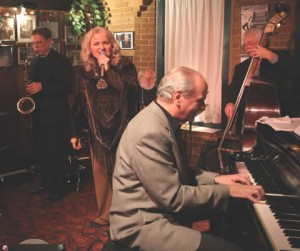 Groovin’ at the Bistro

It was a cold frosty evening on Monday January 24th, but there was some hot jazz, and some warm vibes permeating revered Montreal Bistro, as Debbie Fleming took to the stage, backed by her stellar band.  The room was close to full, and the audience was enrapt as Debbie soared through her originals and cover tunes.  Bruce Harvey gave excellent support on the beautiful grand piano, as Jack Mcfadden pumped out the rhythms on his upright bass.  Don Vickerytapped out some fine rhythms on drums, and John MacMurchy played some exciting solos on saxophones.  Debbie and John did a number of duets throughout the night, and Debbie’s treatment of heartfelt ballads such as “Suppertime” and”Lush Life” evoked audible catch breaths from the audience.  Many compliments came from the audience who enjoyed and were amused by Debbie’s quirky lyrics.  Many of Toronto’s finest singers  and musicians came to support Debbie — Julie Michels, Michael Danso, Michele Mele, Gregg Lawless and Steve Briggs, as well as Larry Green from Jazz.fm. Toronto Star Review of Debbie’s new solo jazz project “Steppin’ Out”In a Toronto Star feature on Thursday Dec. 23, 2004 headlined “What’s On Disc”Star Jazz Critic Geoff Chapman includes Debbie Fleming’s “Steppin’ Out” under “Some good Canadian discs that slipped past the review radar this year. First Vocal Jazz:”*Debbie Fleming’s Steppin’ Out on Riverdale shows off her versatile pipes, big range and quirky originals like “One More Birthday Blues” and “Let’s Jive”.