Debbie Gets ’em Dancing Wherever She Goes!

Debbie had a busy run of gigs in May and June 2005.   She guested to a full house in Markham, with the marvellous Sgt. Pepper’s Quartet consisting of the great Norman Amadio on piano, Frank Wright on vibes, Jack McFadden on bass and Don Vickery on drums.  These guys swing their patooties off — and Frank Wright is downright amazing as he continuously dances like a twenty year old from one end  of his vibes to the other!

The Distillery Jazz Festival was fabulous — if a little chilly.  The crowds were out to have a good time, and Debbie and the boys got them up and dancing in front of the stage!  Debbie’s catchy tunes usually do that — it’s hard to stay in your seat with the infectious rhythms — swing, bossa, Latin — ole!

For more photos of Debbie and her gigs, check out Greg King’s website — Deb has her own special feature page.

Debbie appears at the Distillery Jazz Festival in May 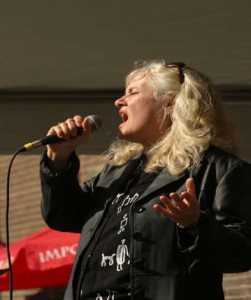 Debbie, Jack McFadden and Bruce Harvey appeared at Le Select Bistro during the Downtown Jazz Festival.  A white-tuxed Bob Segarinni and his very nattily dressed party of four graced the narrow aisle at LeSelect with some fancy ballroom dancing while Debbie filled their requests.