On May 25th, 2019, Debbie Fleming was awarded The Slaight Music Legacy Award, by the SING Vocal Arts Festival, for her contribution to vocal music in Canada as arranger/songwriter/contractor/producer/singer over the years.

Debbie’s early years were the 40s and 50s, when everyone listened to music on the kitchen radios.  There was a plethora of music styles played on each station, and Debbie’s ear always tuned into the vocal groups of the day, which were plentiful!  Vocal groups like the Modernaires, the Ink Spots, The 4 Freshmen, the HiLos – the Andrews Sisters, McGuire sisters were featured on radio, and Debbie just loved vocal harmony!  She remembers asking her parents, when she began grade one, if they thought there would be harmony in the school choir.  Her sense of harmony deepened when she began piano lessons at 6 years old.

When the 50s arrived, and the advent of Rock and Roll – DooWop groups like the Platters, the Skyliners, the 5 Satins and many others ruled the hit parade, along with Elvis Presley (backed by the Jordinaires), Ray Charles (backed by the Raylettes).  Vocal harmony was everywhere, and Debbie would learn all the backup vocals, instead of the lead vocals.  When she finally joined a band, she preferred to sing as a backup vocalist, as singing lead led to intense stage fright.

When she met Ronnie Hawkins in the late 50s, he approached her about putting a vocal group together to back him up, ala the Raelettes, to go on the road and hit the “big tahm”.  She turned down this offer, in order to get her education.

At McMaster, she was introduced to jazz, and sang with a dance band in Hamilton.  It was then, she began to absorb the beauty of jazz harmony!

In the late 70s, when she began to sing in recording studios, she sang in the company of singers who were jazz musicians, and loved groups like Singers Unlimited, Manhattan Tranfer, the Hi Los.  Debbie put a group of 8 singers together, and named them Sing-Co-op-8, and they would get together on Tuesday evenings, and sit around her dining room table and sight read arrangements by Gene Puerling, Phil Mattson, Manhattan Transfer – just for the fun of singing those crunchy jazz harmonies that they loved so much! Sing-Co-op-8 did a few gigs around Toronto over 2 years.  But it was difficult to keep it going, because of all the singers’ schedules.

Her dream to sing backup vocals for artists came true with her record-backup work for many of Canada’s top artists.  Then she got a gig backing up Petula Clark when she was touring North America – this was where Debbie felt most fulfilled.

During the 80s, Debbie was hired to assemble vocal groups for jingles and commercials, and she sang in dance bands as a soloist – to put the food on the table.

One of her most valued singer friends, David Blamires, who had sung in Sing-Co-op-8, began to tour with Pat Metheny in the late 80s, and came home to Toronto after a tour with a cassette tape of a new vocal group from Chicago – Take Six.  Debbie felt the sky open up upon listening to Take Six’s incredible jazz harmonies with a funky, gospelly, R&B influence on their first album.  This was when Debbie became overwhelmed with curiosity about how Take 6 arranged their amazing songs.  She sat at her dining room table, and lifted “A Quiet Place”.  The top and bottom parts were easy to lift and hear.  It was those middle parts that could make things very difficult.  But she did it!  And now, she needed to hear how her arrangement sounded.  She got some friends from the studio, and from the Mendelssohn Choir, together to sightread that chart, and a few of the old Sing-Co-op-8 charts. Her love for vocal groups was back!!!

She approached Phil Dwyer, one of Canada’s top jazz sax players, who was teaching at York University, and asked if he knew any singers who could sight read, and may be interested in singing some jazz charts.  He introduced her to Suba Sankaran, and Dylan Bell, who were students at the time.  They began joining these reading sessions, along with Tom Lillington, Don Laws, Judy Tate, her daughter Emilie Claire Barlow, Larry Folk, Stephanie Taylor and a few others.  That is when Hampton Avenue was born.  They recorded a Christmas CD, and a sophomore project called Everybody Sing.

By this time, Debbie was working with Atari Notator, and later Logic – and with this notation software, was inspired to write and arrange many original tunes for the group.

Hampton Avenue shrunk over the next 10 years, and became a group of 4 – with Debbie, Suba, Dylan and Tom.  They would perform infrequently, while Debbie also had a female trio called ChoirGirlz, who would also perform, with Debbie accompanying on her guitar.  Debbie wrote and arranged many original songs for this group.

Debbie retired from the Mendelssohn Choir (after 40 years singing with the group) in 2015.  She still kept busy with Church choirs, and the Hedgerow Singers.  She was hired to do work with the young Ault sisters, who recorded and performed many of Debbie’s arrangements.  While still singing on occasion, Debbie considered herself semi-retired.

When Debbie was informed of the Slaight award, she was very surprised, as she has always considered herself as flying under the radar.  But looking back on her very musically fertile career, she realizes that she worked with, and hired many of Canada’s best singers to do sessions, and form groups.  Her songs and arrangements are sung worldwide by choirs and ensembles, and she has coached and encouraged many singers along the way.

When she received this prize, on May 25th, 2019, surrounded by warmth, love, admiration – and above all recognition and appreciation for her contribution to vocal music in Canada – she deemed it one of the best days in her life!!! 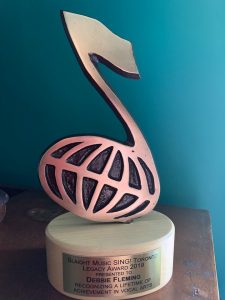