JAZZ AT TEN FEET TALL: Sang a couple of Jazz gigs with Bruce Harvey and Jack McFadden at this charming east-end Toronto bistro, run by Carin Redmon and Andy.  TFT had a jazz policy, that supported jazz music and musicians for nearly 10 years.  Just before my third gig there, it closed down, much to the sorrow of Toronto’s jazz community. 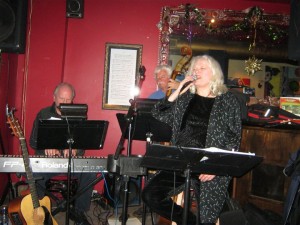 SONGS OF THE 60’S:  Performed my first “Songs of the 60’s” show at the Dominion on Queen with Bruce Harvey and Russ Bosswell in November ’11. The place was packed! It seems a lot of people want to hear well written songs from that era – written by great writers like Bachrach and David, and sung by singers like Dionne Warwick, Aretha Franklin, Marvin Gaye, Petula Clark  and many more.

EDO SUSHI:  Sang my jazz songs at this lovely restaurant on Eglinton W. with Tony Quarrington and Jack McFadden.  It was a lovely, quiet gig, and the food they provided for us was terrific!

LIVE BACKUP VOCALS:  Sang BG’s for Rob Young at Hugh’s Room, and for BettyRichardson as well.    Also sang backups at the Westben Festival, for Rodney Brown. 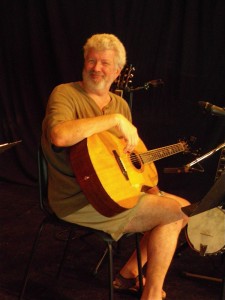 GUEST APPEARANCES:  Debbie was honoured to be invited to sing at a special concert honouring Canadian 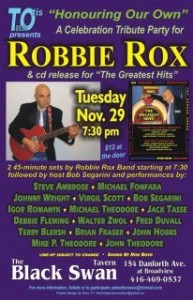 Deb was honoured to be the one drop of estrogen among this stellar lineup of musicians, honouring Rob Rox

Icon, Robbie Rox.  This concert, hosted by Bob Segarini, took place at the Black Swan in Toronto. Here’s a Youtube video of me singing When A Man Loves A Woman   with the great band including Michael Fonfara on keys, and Terry Blersh on Guitar.

RECORDINGS:  Sang backups for the new Rob Young CD, produced by Paul Mills at the Millstream.  Sang and arranged backup vocals for Sam Broverman’s sensational CD project containing all Johnny Mercer tunes, and produced by Ken Whitely.  Lots of horns and swinging big band material on this project, and Sam sings it all so sweetly!

ARRANGEMENTS:  More vocal and instrumental arranging for The Ault Sisters.  Some for Joe Sealy.  One for the Satin Dolls.

HAMPTON AVENUE-4:  Suba Sankaran, Dylan Bell, Tom Lillington and I – better known as the Hampton 4 – were invited by the Green Door Cabaret Theatre, to put on a show of our Christmas material in December.  It was fun to get back to our slick harmonies and Christmas songs – but on the day of the gig, Suba had laryngitis and pneumonia, and was flying at half-mast.  We did our best for the appreciative audience that showed up, and hope they understood that sickness was marring our performance just a tad.  Suba’s beautiful smile held it all together for everyone, and we got through it!  The Hampton 4 also performed Christmas songs at the Rotary Club luncheon at the Royal York Hotel, and did our wandering Carolling gigs at First Canadian Place. Check out our version of my song Christmas (W)rapping:

THE MENDELSSOHN CHOIR:  After a good audition in June, I was accepted back into the choir – but as a second Soprano.  This did not make me happy, as I can still hit the high C’s with the best of ’em – without sounds of strain, or wobble.  After a second audition to see if I could still remain a first soprano – Noel Edison declared he feels my sound is better for the seconds.  That’s the place I always feel the old cows are put to pasture.  However, sitting beside Jennifer Taverner and Cher Farrell– both Elora Festival professional singers – made it far more palatable.  I guess I’m lucky to still be in the choir.

This year we sang Bach’s St. John Passion at Koerner Hall; Mozart’s Mass in C;  Mozart’s Requiem at the Elora Festival; Walton’s Henry V with TSO; Brahm’s German Requiem at Koerner Hall, and of course the Messiah.  We also did our Festival of Carols, and our Songs for a Sacred Space – performed in the St. Paul’s Basillica on Power St. on Good Friday.   I still love the the lofty experience of singing all these magnificent works with this magnificent choir, and the gestalt that happens when 160 voices are singing together.  Can’t be BEAT!

NEW YEARS EVE: Performed my first New Years Eve gig in many years in Port Elgin Ontario, on the shores of Lake Huron.  Jack McFadden led the band, which also included Bob McLaren on drums, John MacMurchy on Sax and Ted Gibbons on Guitar.  We had a wonderful time entertaining the New Years revellers for their dining and dancing pleasure.

CHOIRGIRLZ performed at Winterfolk on the Danforth in February.  Their final concert was at Plein Air in July – where they performed to a sold out crowd of fans and friends who love their harmonies and quirky songs! 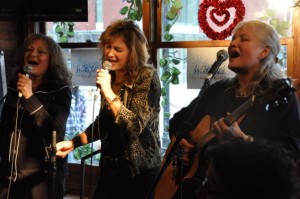 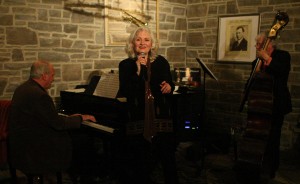 Debbie sings with Bruce Harvey and Jack McFadden at the beautiful Homesmith Bar at the Old Mill.

JAZZ GIGS:  I performed with Bruce Harvey and Jack McFadden at the Homesmith Bar at the Old Mill on March 19th.  Here’s Our Love Is Here to Stay from that evening.

THE GALPALZ:  Briar Boake approached me about forming a duo – and performing an upbeat repertoire of oldies in Retirement residences. Since Briar is a fine uke player, and I’m ok on guitar – we worked it out.  We got a few gigs and went over very well with our audiences.  It was fun – with costume changes, and new songs.  Briar was great to work with.  Unfortunately with all the schlepping of gear and PA, with very small financial return, we didn’t continue after about a year. 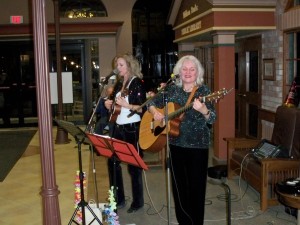 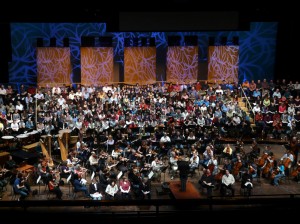 THE MENDELSSOHN CHOIR:  Still in the Soprano 1 section, though our director seems to doubt that someone of my age should be able to hit the high C’s clearly and strongly.  We went to Vancouver in January for the Pre-Olympic festivities.  We performed under the baton of Bramwell Tovey while performing Mahler’s 8th – Symphony of a Thousand.  Upon our return to Toronto, we performed The Verdi Requiem two weeks later with the TSO.   We did “Last Night of the Proms” with Bramwell Tovey – this year, with a “Kate and Wills” theme – here I am with my homemade “fascinator”. 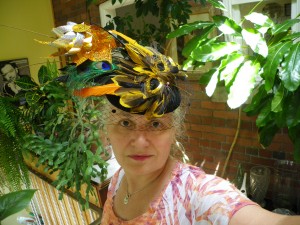 Fascinating Debbie and her homemade fascinator, fashioned for Last Night of the Proms.

In November – another favourite of mine – Janacek Glagolithic Mass, and of course, the Messiah.  TMC is now performing at the spiffy new Koerner Hall – a gorgeous acoustic space for us! 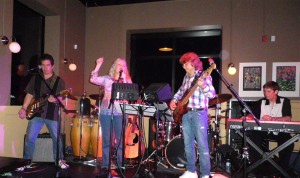 Debbie rocks it out with the fabulous Niagara Rhythm section-Steve Grisbrook on guitar, Penner McKay on percussion, David Norris on drums and Rodger Niznik on keys.

FIRST ONE-WOMAN SHOW: Performed my first one-woman show – entitled “Coming of Age in Etobicoke”.  It was a house concert, and very well attended.  Everyone seemed to really enjoy it, and eagerly asked me to write a sequel to the ongoing story.

CUJAM:  Still playing that uke nearly every Wednesday night at the Dominion on Queen. Here I am singing Dream a Little Dream of me, mistakes and all!

THE AULT SISTERS: Did a few vocal arrangements for this talented trio of young sisters – very enjoyable project.

Switched to Logic 8 – much better and less glitchy than Logic 4.5.  Makes chart writing and song recording much easier! 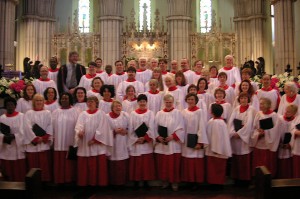 The St. Paul’s Choir, under the direction of Eric Robertson (top left) just before Eric was fired.

ST. PAUL’S CHOIR:  Resigned my position as Alto lead in the choir at St. Paul’s Bloor Street.      Politics within the church hierarchy, tainted my spiritual journey, when our beloved organist/director (and former R&B and recording studio associate) Eric Robertson was fired.

CHOIRGIRLZ   had a banner year.  Appeared at Winterfolk, The Wellington County Library 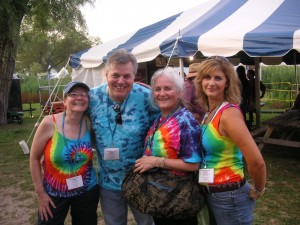 MENDELSSOHN CHOIR:   Performed  Berlioz Damnation of Faust in February;  Mendelssohn Elijah, the Proms;  Berlioz Requiem and Carmina Banana at the Elora Festival; Israel in Egypt at the new Koerner Hall;  Britten’s War Requiem; and of course the Messiah. 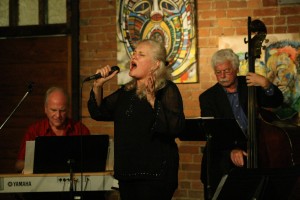 The Debbie Fleming Trio plays at Trane Studio in Toronto – featuing Bruce Harvey on piano, and Jack McFadden on bass.

SOLO PERFORMANCES AT: Winterfolk,  Statlers Cabaret, and at the Anchorage in NOTL with The Niagara Rhythm Section, and at Trane Studio with her jazz trio.

BIG VOICE TV, WITH ELAINE OVERHOLT:  Arranged a chart for The Fawcett Sisters, and helped to coach them for their appearance on the show, which featured Carol Fawcett coming into her own, under the guidance of Elaine.

STAR WARS  at the Air Canada Centre:  Sang in a choir assembled by Susan Suchard.  We were accompanied by an orchestra from Britain, and I met and conversed with  emcee Anthony Daniels – the original C3PO from the Star Wars movie.

ANDREA BOCCELLI  at the AIR CANADA CENTER:  Sang backups for Andrea  in a choir made up of members of the Toronto Mendelssohn Choir.  It was lovely to reunite and chat with David Foster, who was accompanying Andrea.

RECORDING PROJECT:  During the slow days of summer, I compiled a children’s CD/DVD for my grandchildren Sadie and Benson. I recorded some familar and some original songs as Gramma-Lama-Ding-Dong, and added the songs, and photos of the children to a DVD entitled “Special Times”.  It was a favourite Christmas gift.

UKULELE:  I began attending CUJAM – (Corktown Uke Jam) and learning to play ukulele in July of this year.  David Newland, and Steve McNie run this very entertaining and educational evening every Wednesday at the Dominion on Queen in Toronto.  I LOVE my uke!