Saturday March 29th was designated as Earth Hour throughout the world, and in order to do our very small part to conserve the rapidly depleting energy sources of our planet, we were all asked to simply turn off our lights between 8 and 9 pm on March 29th.  On 31 March 2007, 2.2 million people and 2100 Sydney businesses turned off their lights for one hour – Earth Hour. This massive collective effort reduced Sydney’s energy consumption by 10.2% for one hour, which is the equivalent effect of taking 48,000 cars off the road for one hour.

At Trane Studio, I assembled a stellar group of singer-songwriters to provide entertainment for this concert, where we all performed acoustically, with no PA, while our audience dined on great food, to the soft light of candles. It was like a campfire — we were lit with battery operated lanterns, and we invited the SRO audience to sing along with our Earth Hour song.

Interesting how quiet an audience is when they’re not bombarded with the amped up sounds blasting from the stage. 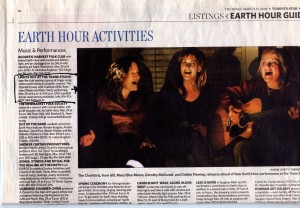 ChoirGirlz got a large photo in The Toronto Star, advertising their successful Earth Hour show at Trane Studio