Deb’s Still At It!

Well folks, last year was a very busy year in my life.  The JAZZ part of me did a few gigs with my band — Orleans Newmarket, Gate 403 and the revered Montreal Bistro.  Just a few weeks after I appeared there with my band – Bruce Harvey, Jack McFadden, Donnie Vickery  and  John MacMurchy the favourite Jazz room in the city of Toronto closed its doors for good.  Although there are still a few small places in Toronto for jazz musicians to play, there was nowhere like the Montreal Bistro — where the  grand piano was always tuned, the food was amazing, and there was a “no talking” policy while the musicians played and the singers sang.  Can’t get more special than that.  We are still mourning the loss, and hope that Lothar and Brigitte Lang will be opening another venue soon in Toronto.

The CHOIRGIRLZ part of me took up about 75% of the year – arranging and co-producing our second CD entitled “Girl Time” during the summer. 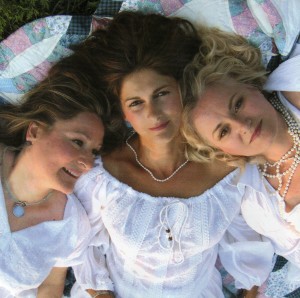 Mary Ellen, Dorothy and I during photo shoot for our 2nd CD “Girl Time”

It’s an album we are all proud of, and it features the swingin’ Bebop Cowboys backing us up.  The band is led by Steve Briggs on guitar and mandolins, the co-producer of the “Girl Time” CD, and incidentally – -my guitar teacher.  In the band along with Steve, are John Adames on drums, Victor Bateman on upright bass, Burke Carroll on steel and dobro, Denis Keldie on Accordian, the totally amazing Drew Jurecka on fiddle and Duncan Fremlin on banjo.  Produced at Soundhole Studios owned by uber-talented   Ray Montford, it all fell together like clockwork.  The CD may be ordered and listened to via the ChoirGirlz website.   Choirgirlz have done a lot of performing as a result of the new recording, and we’re reaching  ever wider circles of appreciative fans . 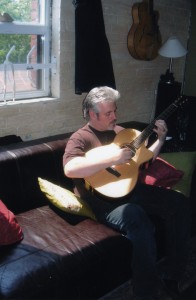 GREG KING has a slew of great photoz he’s taken of both me, and Choirgirlz — we even have a special page on his website.  Go to gregking‘s website  to check out the talents of this fantastic photographer.  He did the cover of our CD, and there are photos on his site of the CD cover shoot.

The CLASSICAL part of me had a very busy year with the Toronto Mendelssohn Choir. Because of my involvement with 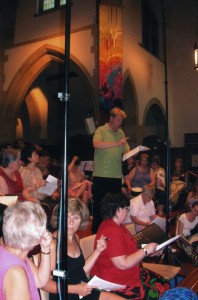 Noel Edison conducts Toronto Mendelssohn Choir, as they record Xmas CD “Festival of Carols” in a heatwave, during June 2006.

ChoirGirlz and Jazz, I chose not to be a member of the Mendelssohn Singers — the smaller 80 voice unit made up of the creme-de-la-creme of the Mendelssohn Choir.  I was part of the recording of Christmas music that was done in June, and released just before Christmas this year. It is a lovely recording entitled A Festival of Carols, and will be a seasonal favourite for years to come. I also enjoyed going to Elora to sing the Mozart Requiem and the mighty Mahler 2nd Symphony — better known as “The Resurrection Symphony”.  What a thrill to sing both those amazing works under the baton of Noel Edison with full orchestra!  We will be performing the Mahler again this year – I think in April.

The Hampton Avenue 4 part of me enjoyed thoroughly reuniting with Suba Sankaran, Dylan Bell and Tom Lillington as we sang carols at First Canadian Place and The Atrium on Bay before Christmas in 2006.  The wonderful arrangements in our book just rang out pitch-perfectly, and I felt my life was full-filled musically.  We don’t get much chance to gig together any more — Suba is heavily involved in recording and touring with her jazz/Indo/fusion group  autorickshaw .  Dylan has just left the talented group  Cadence to pursue more writing and recording, as he is becoming greatly in demand for both these talents.  Tom is busy with his piano tuning business, and also tours extensively with the Canadian Chamber Choir.  With ChoirGirlz’ busy schedule, it’s really difficult to find a window of time to just get together, let alone do a gig.

PLANS FOR 2007 include:
Getting my jazz trio back on the rails and doing more gigs around the GTA. Performing with ChoirGirlz — Winterfolk is our first 2007 gig — the weekend of Feb. 9 – 11th.  It’s free admission for all, and taking place in the Broadview-Danforth area.  Go to  Winterfolk  for more info about venues. Practising harder on GUITAR and taking a few more lessons from Steve Briggs. Getting back to a more healthy workout regimen at Metro Central YMCA. Writing more jazz vocal arrangements and having a few more “singoffs” with members from Hampton Avenue and Cadence. Writing more music for my wonderful church choir to sing (St. Pauls Bloor St.) Writing more songs for ChoirGirlz. Laughing more.  Enjoying my granddaughter Sadie.  Spending time with friends.  Eating healthily, and drinking good beer, enjoying life.  It’s gonna be a busy year!